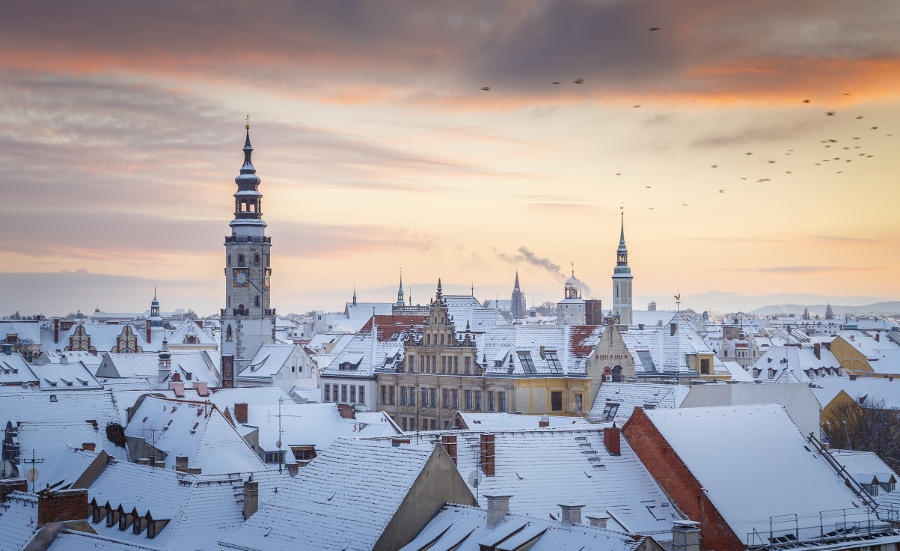 If it weren’t for those famous scenes in the movie Rocky of Sylvester Stallone running up the steps at the Philadelphia Museum of Art, the world might never have known about this fantastic landmark. Not really. But for some smaller towns and sights this is definitely the case. Take for example Görlitz, Germany. After seeing the town used as the filming location for Wes Anderson’s whimsical The Grand Budapest Hotel and doing some research into the town’s beautiful architecture, Görlitz has been on my Must See list.

Located in the German state of Saxony, Görlitz is less than 70 miles by car east of Dresden and about the same distance northeast from watch capital Glashütte. It’s nestled up against the German-Polish border, the Neisse River. On just the other side of the river is the Polish town of Zgorzelec. In fact, the two towns are so close that until 1945, they were a single town. And it’s only within the past decade or so that a bridge has been built.

It wouldn’t be all too surprising if you’re already familiar with Görlitz and just don’t know it. Parts of many notable movies have been filmed in the town. In addition to The Grand Budapest Hotel, Inglorious Basterds, The Book Thief, and The Reader have shot scenes in the town. It’s also the birthplace of former German international soccer player Michael Ballack.

There are plenty of the relatively standard attractions in Görlitz that are, no doubt, worth the visit. From the Nature Conservation Zoo to a toy museum and even a nearby dinosaur park. The Senckenberg Museum für Naturkunde (Senckenberg Museum of Natural History) has exhibits that reflect the region and 200 years worth of its history.

But the real gem of Görlitz is its historical buildings. The city is home to more than 4000 buildings that are considered historically significant and many have been restored. The Schönhof, built in 1526, is the town’s oldest Renaissance building. Today it serves as the site of the Silesian Museum. You can find the Schönhof building in the town’s Altstadt, or old city, neighborhood. From the city hall, St. Peter and Paul Church, and the Altstadtbrücke (or Old City Bridge) you can’t seem to throw a stone in the district without hitting a street lined with notable buildings. The Neisse River serves as the eastern border.