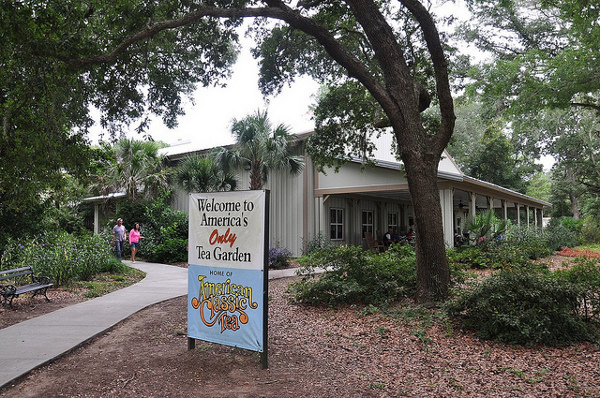 When you think of tea, you probably think of India, China, Japan or even Africa. But did you know that the United States has a single working tea plantation? Nestled on the charmingly small Wadmalaw Island, near Charleston, South Carolina, is the Charleston Tea Plantation. As a tea fan, it goes without saying that it’s on my must see list!

The Charleston Tea Plantation produces both black and green teas from over 320 varieties of Camellia sinensis plants on their 127 acre farm. The land itself goes all the way back to 1666 when it was first claimed by the English. The climate of Wadmalaw Island is perfect for tea: it’s got sandy soil with a sub-tropical climate and plenty of rainfall each year. The island has been largely undeveloped so the 10 miles by 6 miles is unspoilt land and only accessible from the mainland by a single bridge. The Charleston Tea Plantation isn’t alone on Wadmalaw Island. You’ll also find a vineyard on the island as well as the Angel Oak, an oak tree thought to be over 1500 years old!

Purchased by Bigelow Tea in 2003, the Charleston Tea Plantation is more than just an active tea plantation. It’s a setting and an attraction. The site offers both factory tours and trolley tours of the tea fields so you can follow the entire farm to table process, so to speak. The Charleston Tea Plantation is also available for weddings and events.

The plantation hosts a neat event every year: The First Flush Tea Festival. The “first flush” are the first leaves the plants produce each year. Those young leaves are considered to be the “most unique, fresh, and amazing cup of tea.” The festival celebrates those early leaves with music, entertainment, art, and local cuisine. Attendees can sample the first flush during the festival. Sounds like my kind of party!