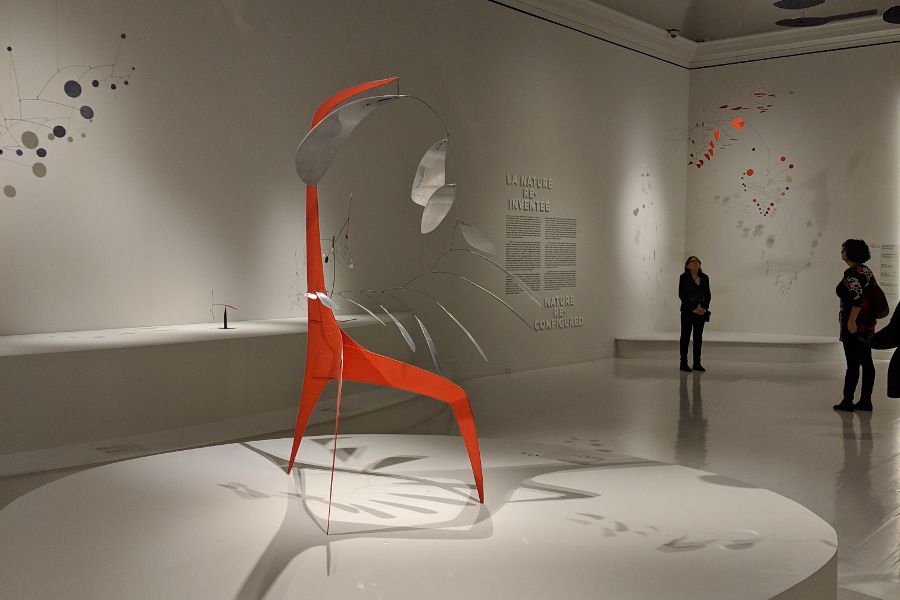 Montreal has had a special fondness for Alexander Calder since at least 1967 when he designed a massive metal sculpture called “Trois disques” (or “Man and His World”) for the city’s World Fair. Now through February 24, 2019, the Montreal Museum of Fine Arts is honoring the artist with Alexander Calder: Radical Inventor, a retrospective that highlights Calder’s unique works and showcases that he is much more than the mobiles he’s perhaps best known for. This rare exhibition is an insightful and striking display of Calder’s talent.

Developed by the Montreal Museum of Fine Arts (MMFA) and the Calder Foundation, Alexander Calder: Radical Inventor is the first major Canadian retrospective of the artist. The exhibition includes 150 works and archival documents. They range from larger-than-life installations that twirl from the ceiling, staggering works that stand on their own, and other works that fit in the palm of your hand. Regardless the size or shape, they showcase Calder’s immense talent in a variety of mediums from painting to wire work and beyond.

Set your watches. Each day, from Tuesday through Sunday, at 2 pm, the museum puts the mobiles into motion. It’s a fantastic way to experience the works the way they were intended.

For the uninitiated, Alexander “Sandy” Calder was born in 1898 and died in 1976. Calder hails from a family of artists. His father, Alexander Stirling Calder, was a sculptor, and his mother, Nanette, was a portrait artist. His grandfather, Alexander Milne Calder, was a sculptor whose best-known work is the William Penn statue atop Philadelphia‘s city hall. (Fun fact: Philly’s Benjamin Franklin Parkway hosts works by all three Calder men: the Penn statue, Alexander Stirling’s fountain at Logan Square, and the youngest generation’s mobile hanging in the lobby of the Philadelphia Museum of Art.)

A Francophile, Calder moved to France and befriended many of the day’s popular modern artists while creating his own works. By the 1930s, he had begun seriously developing his hanging sculptures. Marcel Duchamp dubbed them “mobiles,” creating the term.

Later in his career, Calder focused on large structural sculptures that were often public commissions. “Trois disques” fits into this portion of his artistic career.

A true and diverse artist, Calder also painted, worked with jewelry, printmaking, and more. His creatively takes many forms and shapes.

Walking through Alexander Calder: Radical Inventor gives you a palpable feeling of how much Montreal loves this man. The selection of works on display as part of the exhibition is diverse, imaginative, and show just how timeless Calder’s work is. Indeed, he was ahead of his time. By assembling it all together, you can see just how impressively good Calder was at seemingly everything he tried his hand at. Those early wireworks are striking and beautiful, only hinting at what would be later to come.

Starting with his childhood in central Pennsylvania near the capital of Harrisburg, the exhibit shows the ingenious works that a young Sandy Calder, as his family called him, created before focussing on his wire works, specifically his circus. Calder created a doll-sized circus of everything from ferocious wild animals in need of taming to high-flying trapeze artists and more. He would then “perform” a circus with his creations that was both lighthearted and charming. There’s a video of a performance which visitors can sit and watch. It’s truly mesmerizing watching as Calder deftly manipulates his performers from the background. He’s even ready with some sawdust when one of the animals has an “accident.”

Visitors to Alexander Calder: Radical Inventor don’t need to be experts in the artist or even art. But you’ll leave with a special appreciation for his creativity and spirit.

Admittedly, Alexander Calder: Radical Inventor at the Montreal Museum of Fine Arts was the leading catalyst for my husband and me to road trip up to Montreal for a long weekend. And, quite simply, Radical Inventor doesn’t disappoint.

The curation of the exhibit is simply fantastic. The variety and quality of the items on display are significant. The film clips help to bring Calder, the man, to life. And the way the works are displayed adds to the supreme quality. The mobiles and wire sculptures, in particular, are hung on solid colored walls and lit so as to cast a shadow that lets you see the entire object. With the movement of people in the rooms, the gentle breeze moves the works. This movement allows you to truly experience the works. It goes to show you just how wonderful Montreal is for art lovers.

The Montreal Museum of Fine Art (or Musée des beaux-arts de Montréal if you speak French) is in Downtown Montreal at 1380 Sherbrooke St W. The museum is easily accessible by public transit. You can reach the museum using bus #24 via any of the following stops: Sherbrooke/de la Montagne, Sherbrooke/Redpath, or Sherbrooke/Bishop. With the Metro, the Peel Station or Guy-Concordia Station are the closest stops. The museum does not have a dedicated parking lot so you’ll have to find street parking or a lot.

Thank you to Tourisme Montréal for hosting my visit to Montreal Museum of Fine Arts! All opinions, as well as all photos, are my own.