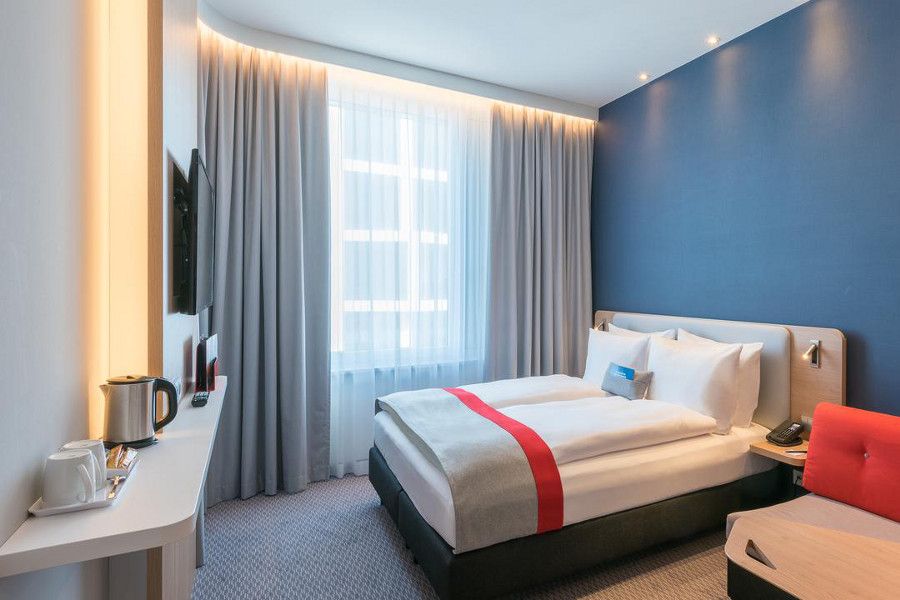 If you’re searching for a comfortable, affordable hotel in Munich, Germany that is just outside the downtown area, the Holiday Inn Express Munich City West, Munich is worth checking out. I recently spent a week staying at the hotel with my husband. From its convenient location a stone’s throw from public transportation to its inclusive breakfast buffet, it just might be my new Munich go-to hotel.

There are lots of reasons to stay in the heart of a city. This is especially true if you are only making a quick visit or are relying on public transportation. But I generally prefer to stay in a more residential area. It’s usually more quiet and you get a better sense of everyday life that isn’t about tourists. In a way, the Holiday Inn Express Munich City West is the best of both worlds. The location is right along the city’s S-Bahn train corridor in the western quarter of Neuhausen-Nymphenburg. The Hirschgarten neighborhood surrounds the hotel with apartment buildings, businesses, a concert venue as well as the very suburban-feeling park and the city’s largest Biergarten. And Schlosspark Nymphenburg isn’t far either.

While the hotel’s location is away from the downtown action, it isn’t in isolation. The hotel is only a few minutes’ walk from the Hirschgarten S-Bahn stop with regular trains heading into popular downtown spots like Marienplatz and Hauptbahnhof (the central train station). The nearby train station made a big difference for us. It was really noticeable for us how much time we were able to save by quickly getting into the heart of the city or easily transfer to get where we were going.

And while the location is relatively central, you don’t have to worry about street noise. During my stay there was nearly non-stop construction going on directly across the street. But from inside the hotel, unless you stood at one of the front windows, you wouldn’t have known. Street noise was never a problem.

Checking In: The Room

At the end of the day, you really just want a comfortable, clean and safe spot to come back to and lay your head. At least that’s my main concern. I found the Holiday Inn Express Munich City West to check all the boxes.

Admittedly as it’s part of the Holiday Inn Express chain, it’s a bit cookie cutter and lacking in the Bavarian charm you’ll get from other local independent hotels. But, it’s likely more comfortable than those competitors.

Our room had a double bed, desk, chair and a rather large wall-mounted television. There is also a small safe but no in-room mini-bar. (The hotel does have a large bar downstairs as well as a vending machine in the lobby.) Our view was far from the elevator (a plus, from my perspective) but with only a view onto an interior courtyard (a bit a of a disappointment). The room’s lack of drawers or shelves on which to unpack also disappointed my husband. But there was a small space for hanging clothes. The room also has an electric kettle with complimentary tea and instant coffee.

The bathroom was a decent size with a rather large walk-in shower. While you might have to wait for hot water in some hotels, this wasn’t a problem. Instant hot water and an easily adjustable shower head made for a luxury experience on a budget.

In general, the hotel is still quite new but starting to show a bit of wear here and there.

For me, there are certain things about the Holiday Inn Express Munich City West that make me likely to stay again. Sure, it was clean and it was conveniently located. It is also affordable. But it included a breakfast buffet you could enjoy each morning in the large and bright open areas of the lobby. The breakfast offerings were the same everyday: fresh fruit, rolls and croissants, hard-boiled eggs, cereals, yogurts as well as a selection of meats and cheeses. These is also a pancake machine, juices, and water. They offer a coffee machine to make those fancy brews at the push of a button. There is a small tea selection but it’s underwhelming in both variety and quality. The selections are limited but consistent. Everything was fresh and tasty.

Another thing I really appreciated was the maid service. They were always quick to get in and get out while still doing a great job with the cleaning. There was never a time where our room was unavailable due to cleaning.

There was also, of course, high speed WiFi throughout the hotel. It worked flawlessly except on our last couple days when certain websites, like Instagram, were noticeably blocked. While not a big deal, it’s still a little irritating.

There are also small touches that make a big difference. Many of the power outlets have built-in USB ports allowing you to charge your phone without a travel power converter. In the bathroom, there was even a built-in power converter for electric shavers or toothbrush chargers. These little things make travel from abroad a lot easier. We didn’t bother to use our travel power converter or powerstrip the entire time; it simply wasn’t necessary!

After being extremely impressed during an overnight stay at the Holiday Inn Express in Friedrichshafen, Germany, I wanted to give the location in western Munich a chance. And I’m sure glad that I did.

As a chain, the Holiday Inn Express Munich City West is part business hotel and part tourist hotel. There’s no special charm but it’s efficient and consistent. You can be sure you’re getting a good deal and spend your time (and money) instead exploring Munich and the surrounding area drinking beer, visiting museums or whatever your heart desires.

This review is unsolicited. All opinions are my own. The photos are courtesy the IHG website. This post contains affiliate links.