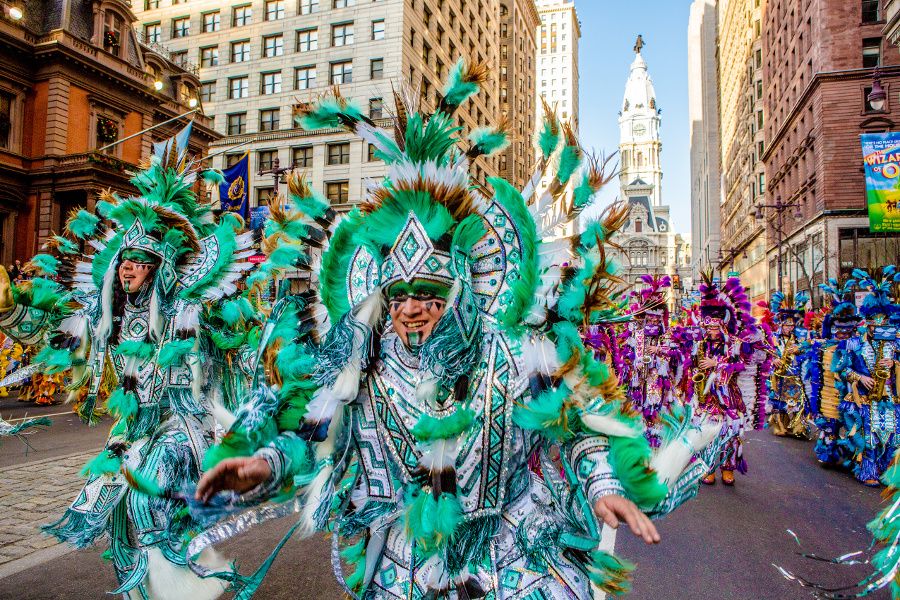 The Mummers are one of those distinctly Philadelphia traditions that can be difficult for outsiders to understand. It’s like scrapple or booing Santa Claus at a football game. Each year on New Year’s Day the Mummers Parade takes place. Weather permitting, this community of sequins-wearing, string band dancing and playing group strut their stuff through Philly starting at city hall and then preceding down Broad Street towards South Philadelphia. And in true Philadelphia fashion, either you love them or you hate them.

The History of the Mummers Tradition

Philadelphia, Pennsylvania‘s Mummers tradition is a blending of the cultures of the city’s immigrant populations. Traditions of storytelling whilst in costume originate from across Europe, the United Kingdom and Africa and are blended together. It’s a mix of the rowdy masked parade during the Ancient Roman festival of Saturnalia, the city’s Swedish population visiting neighbors after Christmas, as well as English, Irish and German traditions of costumed plays that are community-based.

Although the tradition is said to have been around in the city since the mid-1600s, the city’s first official parade was held on the first day of 1901. Philadelphia’s Mummers Parade is thought to be the country’s oldest folk parade making it an important part of the city’s history.

While much of the annual Mummers Parade on New Year’s Day is simply a celebration, don’t fool yourself. This is also a competition that is taken very seriously. The parade participants are broken down into five categories (called divisions): the comics or clowns; the wenches, which are comics that are women or men in women’s costumes; the fancies, which perform in elaborate costumes; string bands, which perform musical numbers along the parade route; and the fancy brigades, large groups with elaborate floats, props and performances.

Within each division are local clubs dedicated to the category. Loyalty to the club and competition is fierce. A wide range of prizes are awarded to teams, individuals, costumes and more. It’s also bragging rights for the next 364 days.

Today there are more than fifty teams that take part across all the divisions. Because the parade is so popular with so many participants and performances, it can be a bit lengthy. At its peak, it took approximately eleven hours to complete! These days it’s “only” around six hours. The cause of the shortening? Budget cuts.

The performance is the most important part of the Mummers tradition. So members spend the entire year preparing the story they will tell. Some are political, some are farcical, but they all tell some sort of story.

Since costumes can be judged, some of the divisions don elaborate costumes they spend the entire year making. Some can weigh near a hundred pounds and cost thousands of dollars.

Unfortunately, there have been some controversy over the years. Historically, some Mummers did use blackface. Luckily, in the 1960s, the city put in place a policy banning the derogatory action. Prepare yourself because, sadly, it still does show up from time to time despite the rule.

Similarly, women were banned from performing as a part of the Mummers Parades until the 1970s.

Many of the performances incorporate the Mummers’ signature move: the Mummers Strut. It’s a twist on a move from the old minstrel shows. It’s a comical cakewalk with outstretched arms. You’ll commonly also see an arm, pumping in the air, while holding a parasol. The strut is commonly performed to the Mummers’ theme song, “Oh, Dem Golden Slippers” by James A. Bland.

The Mummers’ big day is their New Year’s Day parade. It’s free to line the parade route and watch the Mummers go by. But seats on the bleachers require a paid ticket.

If you can’t make New Year’s Day, they also perform at certain other events throughout the year. For example, you can spot them at Mardi Gras celebrations.

If you really want to get up close and learn more, there’s a Mummers Museum (located at 2nd Street and Washington Avenue). Since it opened in 1976, the museum’s collection has included a selection of costumes, videos, photos and a collection of the tradition’s oral history. Seeing the costumes, in particular, up close will give you a chance to see just how much attention and love is put into it.