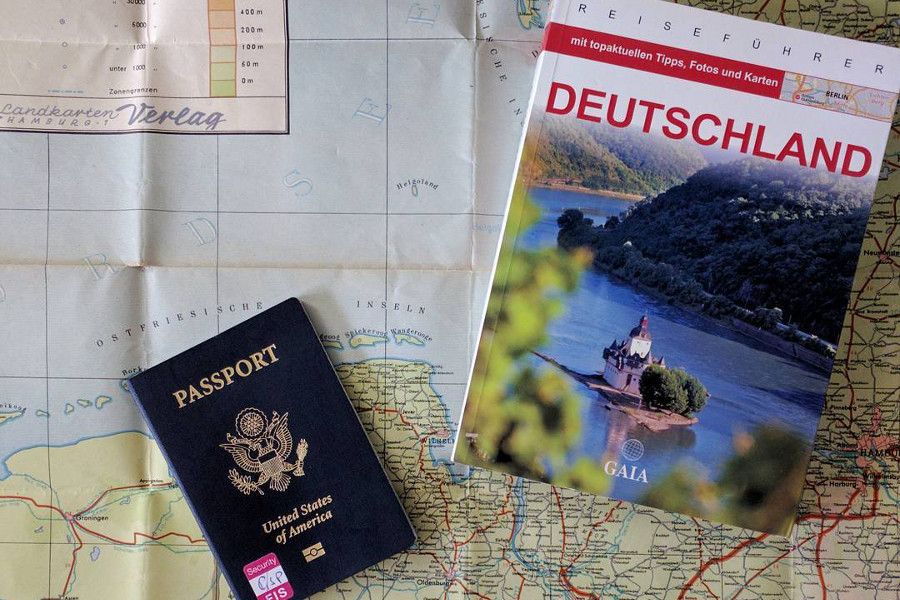 I wish someone had told me these things before traveling to Germany for the first time. My husband (who was then my fiance) and I went armed only with our high school German knowledge, an envelope full of Euros and a positive attitude. But our good attitude only went so far as we spent two weeks in Berlin. It was rough. Since then, we’ve been back to Munich almost a half dozen times and we’ve become a bit of a well-oiled machine. Here are my best tips for things to know before traveling to Germany for the first time. Even repeat visitors might find something of interest.

Always Take Your Wallet to the Bathroom When Traveling to Germany

There’s nothing worse when traveling than having to use a dirty or ill-stocked bathroom. This is rarely the case when traveling to Germany. Many public restrooms or bathrooms in popular places (restaurants, department stores, etc.) have cleaners that remain in the bathroom and clean after every (or almost every) use. This is a wonderful service and the cleaners usually do a great job that’s significantly undervalued if you ask me. They may not always be luxurious, but they’re clean. It’s customary to leave a small tip, either upon entering or exiting, for the cleaner. You’ll usually see a small dish for the tips. I always keep a few fifty-cent pieces in my pocket on any day out and about.

Unless there’s a sign stating that customers will be seated by staff, it’s safe to assume that you can seat yourself. This goes for restaurants with outdoor seating, too. Simply pick a table and sit down. Menus, as well as silverware and napkins, are generally already on the table.

Similarly, you will find that some Biergarten offer both full-service and self-service. There’s one dead giveaway that a table is full-service: a tablecloth. The tables are also usually the ones closest to the restaurant. For self-service in the Biergarten tables are communal. Just find an open spot at any table. If there are already people sitting at the table it’s polite to ask “Ist hier frei?” That translates to “Is this spot free?”

Culturally, in the United States a “good waiter” is one that checks in to make sure all your needs are met, someone who predicts when your glass needs a refill or you need extra napkins. In Germany, the expectations are different. If you need or want something, it’s on you to ask for it. The waiter will likely not return, specifically, to ask but you’ll probably see them making their presence known from afar. Just give a little signal and the waiter will stop over.

The same generally goes for when you’re ready to settle the bill. You may have to signal the waiter and ask to pay. They’ll tally up the bill then and there. Always tell the waiter how much you want to pay. The amount should include the tip, if it’s not already included in the bill.

Don’t Walk in the Bike Lane When Traveling to Germany

DING! DING! Germans are known for their love of cars but they take their cycling just as seriously. Most big cities have dedicated bike lanes parallel to the sidewalks or streets. If you happen to wander into the bike lane and a cyclist is approaching, it can be rather dangerous. If you hear a bell, check your surroundings. It could very well be a cyclist notifying you that they’re approaching and you’re in their way.

Getting Served in the Biergarten

At some Biergarten in Bavaria, you’ll have an option of getting a full-service meal or just self-service. Self-service means you purchase your food and drink from stands, sort of cafeteria-style. In some of the drink stands, you’ll be expected to grab a beer mug of your preferred size and rinse it out. Then, hand the clean mug to the staff member at the drink stand to fill it.

Pfand in the Biergarten

Those big beer mugs aren’t inexpensive! And to stop people from walking away with them as souvenirs, some Biergarten will make you pay a deposit. Generally the deposit is a nominal amount of around a Euro. When you pay for your drink, you’ll be given a token. That token is proof that you purchased your drink there. You can get your drink refilled as many times as you want using the same glass. But when you’re ready to leave, take the empty mug to the deposit return stand along with the token. The employee will return your deposit to you.

It is said that the Germans are extremely skeptical of credit cards. Cash is still, by and far, the preferred method of payment in Germany. Sure, credit cards and other digital wallets have increased in usage in recent years. But it’s safe to assume that a restaurant or shop accepts cash but not necessarily credit cards. Because of this, you’ll frequently see ATM machines. They can be especially busy on Friday afternoons and weekends.

If you’ve ever ridden the subway in the United States, you’ve likely had to scan a pass or a ticket, or deposit a token into a turnstyle. In Germany, there are no turnstyles.

For local trains, there are generally machines in which you validate your ticket. The machine will stamp the current time on your ticket. The ticket will be valid starting from the time of the stamp. Typically for regional and long distance trains, you may need to sign the ticket itself. So how do they know you’re riding with a valid ticket? On local trains, undercover officers may pop up at any time and ask for your ticket. If you don’t have a valid ticket (a so-called Schwarzfahrer), you’ll be fined on the spot. On longer distance trains, such as with Deutsche Bahn, tickets are usually checked throughout the ride. Busses and trams also require validated tickets. You may be asked to show a valid ticket by the driver or another transit employee.

Read More: Save Money Traveling in Bavaria With These Simple Tips

If you’re going shopping, specifically in a grocery or department store, be sure to come prepared with a shopping bag. Most stores charge extra for bags. If you need a bag, you’ll either need to ask the cashier or, if they’re on display, place one with the items you intend to purchase.

For many foreigners, this one will be a bit of a surprise. While many restaurants in the United States place complimentary glasses of water on the table as soon as you sit down, the same isn’t true in Germany. If you want water, you’ll pay for it. And it will likely be out of a bottle, not the tap. “Water” is also generally interpreted as being sparkling water. So if you prefer still water, you’ll have to specify.

Similarly, beverages, like soft drinks and water, are not automatically refilled as you empty your glass. A “refill” will have to be explicitly ordered and it will typically cost the same as your original drink.

It really goes a long way when traveling in a foreign country if you know a few words in the local language. At the very least, you should be prepared when traveling to Germany to be able to say “please,” “thank you,” and ask if they speak your language. I’ve put together a simple guide of basic words, phrases and pronunciations to help you out.

7 thoughts on “Things to Know Before Traveling to Germany”