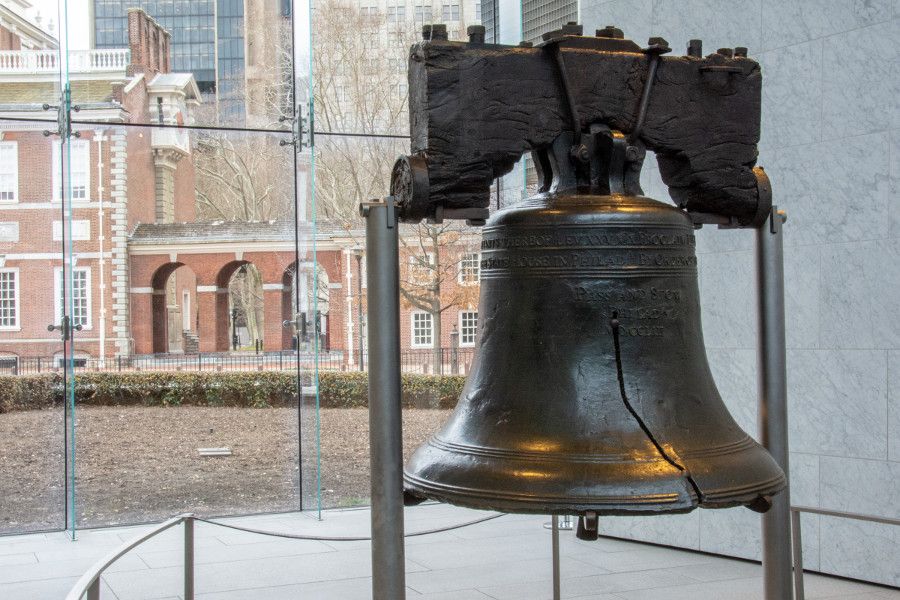 From the Liberty Bell to the Declaration of Independence, Colonial Philadelphia has an important part in the history of the United States. In addition to Pennsylvania being one of the original thirteen colonies, Colonial Philadelphia served as the location of the First and Second Continental Congresses as well as, temporarily, acting as the capital of the United States. Today, visitors can explore many of these historic sites as they have been preserved.

A week before Christmas in windy, 30-some degree temperatures (that’s Fahrenheit, mind you), I decided it would be a good idea to go sightseeing in Philadelphia. Maybe it was the cold weather, maybe it was the time of year, or maybe it was because I arrived just after 9 in the morning, but it was empty. There were only a few other people around seeing the sights and it made the experience less stressful and a bit more interesting.

Officially, Philadelphia was founded in 1682 by William Penn, who is also the state’s namesake. The parcel of land was part of a larger land grant made by King Charles II to Penn’s father to repay debts he owed him.

In the 18th century, as the relationship between the Crown and the Colonies deteriorated, Philadelphia became an important location. In 1774, the First Continental Congress met in Philadelphia with twelve of the colonies sending representatives. The following year the Second Continental Congress met in Philadelphia again and this time drafted and signed the Declaration of Independence. Philadelphia also served as the location of the drafting of the Constitution in 1787. The city also acted as the capital of the United States for ten years starting in 1790.

If you’re planning to visit the sights of Colonial Philadelphia, plan in advance. Independence Hall requires timed tickets for a tour from March through December. The tickets are free but you can only get them in person the day of the tour. You can reserve them ahead of time for a nominal fee (this was $1.50 when I took the tour) but you have to pick them up 45 minutes in advance of your tour.

I reserved my tickets ahead, which ended up being unnecessary due to the minimal crowds, but it offered peace of mind. I arrived about 45 minutes ahead of time, had no lines to deal with and the park ranger at the Independence Visitor Center recommended I go see the Liberty Bell before my tour.

The Liberty Bell is an incomparable symbol of early America that every school child knows. That bell with the crack has a special place in American hearts similar to the Statue of Liberty. In order to see the Liberty Bell, visitors must first pass through a security checkpoint.

Once through, there are a number of exhibits set up with information about the history of the bell: it was cast by England’s Whitechapel Bell Foundry and was originally intended to be the bell in the Pennsylvania State House (now known as Independence Hall). Fun fact: Independence Hall was, at the time, the tallest building in North America. As the exhibits progress, they explain how the bell became less of just a symbol of Philadelphia’s importance and more a symbol of the American Revolution and then finally a symbol of liberty for all.

Once past the exhibits, you can just about walk right up to the famous bell. It is, of course, cordoned off. The park ranger on duty pointed out the misspelling of Pennsylvania as “Pensylvania” (note the missing “N”). He also explained that the bell has a protective wax coating. Today, the bell is extremely fragile and it no longer moves from its location in the heart of Colonial Philadelphia. But there are chips around the bottom of the bell from trips the bell made prior to settling in a permanent location.

After a quick trip to see the Liberty Bell up close and personal, I traveled across Independence Mall. Luckily, this historic portion of Philadelphia’s Old City neighborhood is very compact. It’s easy to jump from spot to spot and see everything.

There is another security checkpoint at Independence Hall. It was, again, very quick and I was through into the courtyard area. I had only just arrived when a park ranger stopped me: would I like to take a tour of Independence Hall? Next thing I knew I was ushered in to join a tour just starting. There were only three people there for the tour and it was more than a half-hour before the tour I’d pre-scheduled. Talk about jumping to the front of the line!

The tour is relatively brief and includes a visit to several rooms inside the historic building, including the Assembly Room, where you can see the rising sun chair that George Washington sat in as well as Thomas Jefferson’s walking stick. Meanwhile upstairs you can admire Revolutionary era maps of the colonies. The tour is the only way to access these rooms as there is no self-guided tour.

There are a number of other sights to see around Independence Mall. Some of the spots are a part of Independence National Historical Park while others are not. In front of the Liberty Bell is the President’s House Memorial, an open-air wall-less building of the country’s third presidential home. Inside the nearby American Philosophical Society I saw a small but interesting exhibit on Thomas Jefferson. If you’re more into seeing artifacts, then check out the Great Essentials exhibit to see actual surviving copies of the Declaration of Independence, the Articles of Confederation and the Constitution of the United States.

There are also a number of other sites around Philadelphia’s Old City that are worth a visit if you’re in town, such as Elfreth’s Alley and the Betsy Ross house. I also highly recommend the Museum of the American Revolution. The nearby museum really explains not only the war itself but the people who were apart of it.

Throughout the Old City area are a number of statues that caught my eye. Benjamin Franklin, one of the city’s most famous residents, stands on the side of the American Philosophical Society building. Elsewhere you can see Evangelos Frudakis’ The Signer and a statue of Commodore Barry.

For drivers, Philadelphia can be challenging. There is street parking, especially on side streets. However, finding a spot can be like winning the lottery. If you’re driving, your best bet will be one of the parking lots or garages around the area. Public transit can be a better option. There are nearby bus stops around the multiple block Independence Mall area. The closest Market-Frankford Line rapid transit stop is 5th and Market. If you’re coming with regional rail, Jefferson Station, at Market Street between 10th and 12th Streets, will be your stop.

3 thoughts on “Colonial Philadelphia: From Liberty Bell to Independence Hall”