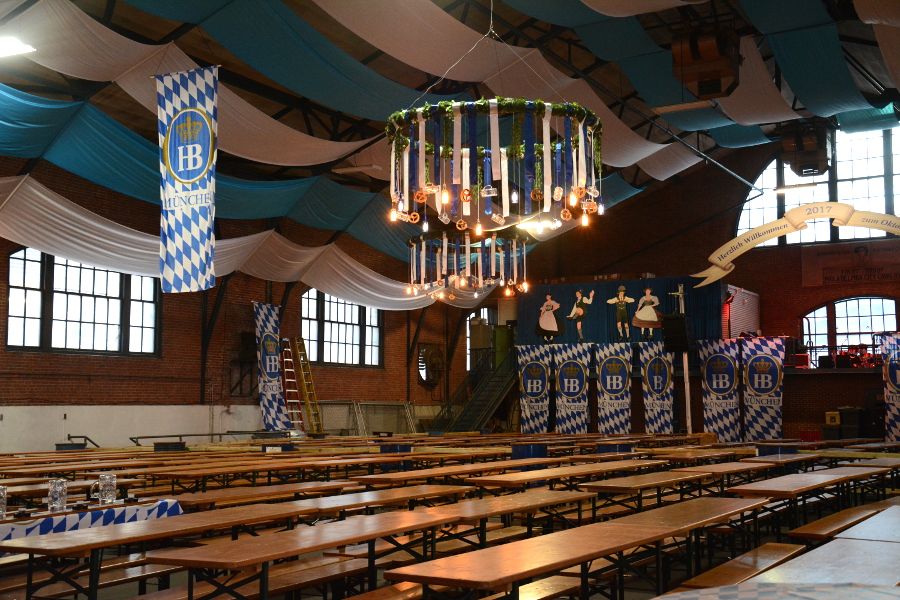 Earlier this week, after 18 days of rowdiness, revelry and more beer than you can shake a stick at, the original Oktoberfest celebration in Munich, Germany came to a close. But most of us can’t make it over to Bavaria to celebrate. Philadelphia‘s Brauhaus Schmitz has come up with the next best thing: an Oktoberfest celebration to entice partiers from around the region. I was lucky enough to get a sneak peek at Brauhaus Schmitz Oktoberfest, which runs Friday, October 6th through Sunday, October 8th, 2017.

From the moment you walk into the 16,000 square foot Armory on 23rd Street you’re hit by a festive feeling. The building alone is impressive in both its size and its architecture but for Oktoberfest it’s been transformed. Huge Hofbräuhaus banners hang from the ceiling and the walls while overhead are gigantic mobiles with glass Krug (or German beer mugs) and pretzels among blue and white ribbons. At the far end of the room, past line after line of traditional Biergarten tables is a bandstand. A DJ was spinning favorites like Falco‘s “Rock Me Amadeus” and Nena‘s “99 Luftballoons” and it really set the mood.

What would Oktoberfest be without beer? Brauhaus Schmitz aren’t serving up local craft brews like some similar Oktoberfest celebrations. No, they’re going for the real deal. Hofbräuhaus Märzen from the home brewery and Biergarten in Munich as well as a Hofbräuhaus Oktoberfest special beer from the brewery in Traunstein, southeast of the Bavarian capital not far from the Chiemsee. The only downer? The beer was served in plastic cups.

There are also a few wine and cider options as well as hard liquor for shotskis if you’re really looking to loosen up.

Brauhaus Schmitz Chef Jeremy Nolen puts out quite the spread for Oktoberfest. But while Munich is known for its Bavarian cuisine, Nolen puts a decidedly Philadelphia twist on the food offerings. There are Kielbasa sausages in great locally baked hoagie rolls and juicy, tender and flavorful pork sandwiches. There are also small soft pretzel sticks, charcuterie platters and vegetables.

The folks at Brauhaus Schmitz deserve credit for trying to bring Oktoberfest to the Philly area. Sure, it’s not a replacement for actually trekking to the Munich Wiesn and rubbing elbows with locals in their best Trachten. But it’s a little taste of a Bavarian tradition close to home. If you’re looking for a way to unwind with friends this weekend, consider Brauhaus Schmitz Oktoberfest.

Tickets are still available for Brauhaus Schmitz Oktoberfest. You can Prost on Friday, October 6th at 7 pm, Saturday, October 7th at 1 pm or 7 pm, or Sunday, October 8th at 1 pm.

The 23rd Street Armory is on 23rd just above Chestnut Street. It’s just a short walk from 30th Street Station. It’s also near the 22nd Street Trolley stop which serves routes 10, 11, 13, 15, 34 and 36. Street parking is available in the neighborhood but can be difficult to come by.

And, of course, you can always visit Brauhaus Schmitz anytime of the year at their location on South Street.

Thank you to Brauhaus Schmitz and Aversa PR for hosting me!