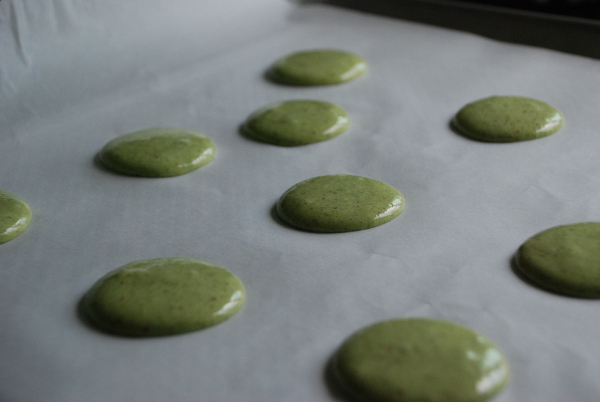 After my first experience making French macarons — in which I got about 50% success — I decided I wanted another go. They really weren’t that difficult to make and the possibility of flavor combinations seems endless. French macaron attempt #2: Matcha green tea French macarons with milk chocolate ganache. Didn’t take long to get me overly confident, now did it?

Like my first attempt, I had about 50% success. I decided to pipe and bake all the cookies at once. However, in doing so I had to use two baking sheets and bake them on separate racks in the oven. The cookies on the top rack baked perfectly. Those on the bottom rack…not so much. They were still tasty but they were shattered shells that baked up too much. The theory my mom came up with is that the sheet on the upper rack blocked the sheet on the lower rack. I think she’s probably right. Next time, I’m going to bake separately if I can’t fit everybody on the same rack. Oh well: live and learn.

The Matcha green tea flavor didn’t come through as much as I’d hoped although you could taste it. The milk chocolate ganache was just overwhelming. A perhaps a bit too sweet for my taste. I think I prefer the bittersweet chocolate ganache. But again, it’s a personal taste thing.

I will say, my batter was not as fluid this time and made piping a lot easier.