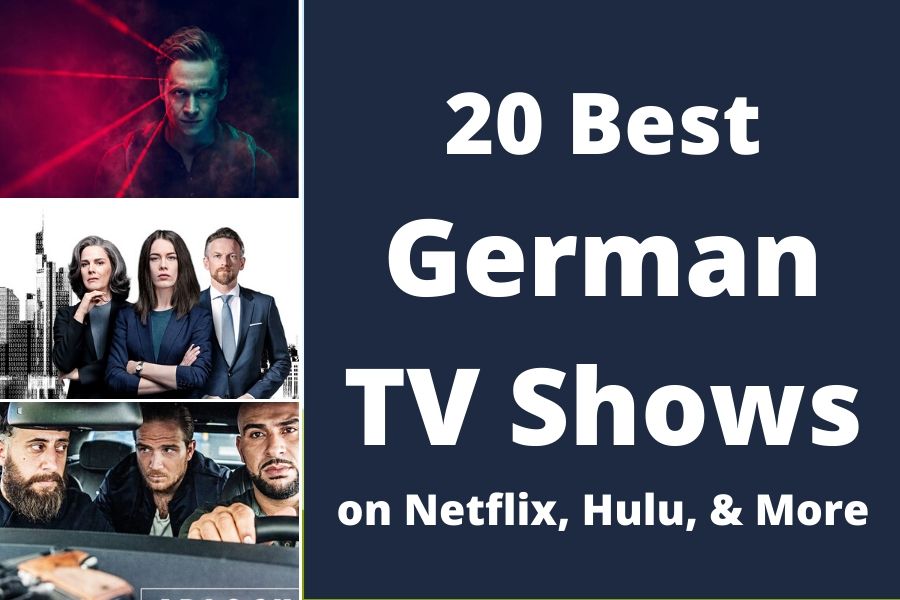 For German language learners, it has never been easier to practice your listening skills. With any number of streaming video services, you can watch German TV shows. There are quite a few German series on Netflix that you can choose from and most are Original Series that you will not be able to find elsewhere. But whether you are looking to practice your German language skills or you just want to be entertained (or maybe a little of both!), I have pulled together twenty great German shows that you can stream right now.

If episodic television isn’t you’re thing, check out my list of 25 movies you can stream now on Netflix, Hulu, and Amazon Prime Video.

A dark thriller, Babylon Berlin captures the excitement, the indulgence, and the uncertainty of the German capital city in the late 1920s and early 1930s. Based upon the books of author Volker Kutscher, the series tells the story of Gereon Rath, a police detective from Cologne, and Charlotte Ritter, a flapper who aspires to become a police detective. Rath is sent to Berlin to assist in one case but gets wrapped up in something larger.

Babylon Berlin is certainly one of the most lavish German TV shows. The series is written and directed by Tom Tykwer, Achim von Borries, and Hendrik Handloegten and stars Volker Bruch and Liv Lisa Fries.

Travel back in time to 1983 with Deutschland 83. In the show, Jonas Nay portrays Martin Rauch, an East German soldier who is convinced to go undercover in West Germany. Assuming the identity of Moritz Stamm in the capitalist West, Martin lives a dangerous life leaving behind his family, befriending “the enemy,” and carrying out his mission. In addition to Nay, the show stars Maria Schrader and Ludwig Trepte.

The German TV series continues in its second season under the name Deutschland 86.

On Dogs of Berlin, a German TV show on Netflix, police officers Erol Birkan and Kurt Grimmer investigate after a famous (and fictional) German-Turkish soccer star is found dead hours before an important game. As the investigation into the murder starts, no one seems to be quite as honest as they first appear. And that includes the police!

Watch Dogs of Berlin on Netflix.

One day, Lukas is managing a hotel in Berlin on You Are Wanted. The next day, after a cyberattack, he is a suspected member of an activist terrorist group. No matter where Lukas turns, he is being pursued and followed. No one trusts him. Not even his own family. Can he figure out who is behind this? And, more importantly, how to end it?

Matthias Schweighöfer portrays Lukas while Alexandra Maria Lara plays his wife Hanna. You Are Wanted was the first Amazon Original Series not in English to be released internationally.

Watch You Are Wanted on Amazon Prime Video.

Wer kann, der Kann!, as it’s known in Germany, is the German version of the American Netflix series Nailed It! Each episode of this baking show features three contestants that are ordinary people with no real baking experience. The host challenges the contestants to make something fantastic to look at and delicious to eat. It’s colorful, silly, and over the top and not actually a good representation of baking.

Watch Nailed It! Germany on Netflix.

Jana Liekam is a young woman working in investment banking and she has big ambitions. After she is wrongly fired, she is quickly pulled into a scheme controlled by her the head of her former company. Jana’s given her dream job in Frankfurt but everything comes with a price. And on Bad Banks, everyone has their own designs on power and money.

The show bounces around between Luxembourg and Frankfurt, among other spots. As such, there’s a mix of German, French, and English. Once you start watching Bad Banks, it can be difficult to stop!

Dark is the first original German series on Netflix. Set in Southwestern Germany, the show delivers on the promise of the title. After children begin to vanish in the town, families begin a frantic search to find them. But their search takes them where they least expect it: time travel into the past.

Das Boot sails again. The thrilling book turned dramatic film is now a television series. A sequel to the 1981 film, the series picks up roughly nine months later in 1942. The series follows the life and work of a crew for a German U-boat as well as the French Resistance.

No doubt you have heard of Sigmund Freud, not you may never have seen him like this. In the new for 2020 German series on Netflix Freud, the psychoanalyst is still an unknown young man in Vienna, Austria of the 1880s. The series follows Freud as he investigates a murder and gets mixed up in the rich and powerful.

Set in Berlin’s rough but up-and-coming Neukölln neighborhood, 4 Blocks revolves around a Lebanese crime family. When family patriarch Toni’s old friend Vince shows up out of the blue, things change. The Hamady family is moving more into the business of selling drugs and Vince is actually an undercover cop. Things become lucrative and dangerous fast!

Based on the 2012 autobiography of Deborah Feldman (Unorthodox: The Scandalous Rejection of My Hasidic Roots), Unorthodox is a four-part Netflix miniseries following Esty, a young Jewish woman. After Esty flees an arranged marriage and her Ultra-Orthodox community in Brooklyn, New York, she ends up at her mother’s in Berlin. Esty is forced to navigate a new life in a new country while her husband decides to try and find her.

The miniseries is not solely in German; it also is in English and Yiddish, too.

Fans of the American comedy The Daily Show will recognize Heute-Show. The weekly show on German broadcaster ZDF is an ironic and sarcastic take on the news and current events. The show highlights the silliest and most unbelievable things people and politicians have been saying. Unlike the American version of the show, the comedians all adopt pseudonyms and characters (with the exception of host Oliver Welke). Heute-Show is one of the shows from ZDF that does offer German-language subtitles.

On the German TV show Skylines, a hip hop music producer named Jinn in Frankfurt signs a deal with Skyline Records. But Jinn finds out the music industry and this record label, in particular, are not quite what he bargained for.

Spoiler Alert: Skylines has already been canceled. But Netflix can always change their mind, especially considering the popularity of the series both inside and out of Germany.

If you love German soccer (football), then Inside Borussia Dortmund is for you. The four-part series goes behind-the-scenes of one of the Bundesliga’s top clubs during their 2018-2019 season. Each episode is more than an hour-long and offers interviews with players and staff while also offering a peek inside the locker room, training facilities, and more.

Amazon offers the series both with English subtitles or dubbed in English. But dubbing won’t help you practice German so stick to those subtitles if you need them!

In the fall of 2019, Netflix released their Criminal series in an unusual way. Four series, based in four countries (France, Spain, the UK, and, of course, Germany), were all released on a single day. Each series has three episodes set in a police interrogation room. In addition to being a very unique German series on Netflix, this is a must-see for fans of psychological thrillers and crime stories.

Criminal: Germany stars Nina Hoss and Peter Kurth (who you can also see in Babylon Berlin).

If you’ve ever tasted a slice of Sacher Torte, then you may already be familiar with Vienna’s Sacher family. The two-part made for Austrian and German television miniseries Hotel Sacher is set in the early 1900s. The show is a dramatic telling of the famous and historic family who ran the Hotel Sacher in the Austrian capital city.

We Are the Wave

Based on Morton Rhue’s 1981 novel The Wave, We Are the Wave focuses on a group of teenage friends in a made-up German town. The group decides to take it upon themselves to fight what they see as injustice and social problems. But what happens when the idealistic group isn’t so idealistic?

Watch We Are the Wave on Netflix.

In the German-speaking world, Tatort is a Sunday night institution. The series debuted in 1970 and this German TV show is still going strong. The weekly crime show takes place in a different German, Austrian, or Swiss city, helping viewers to feel especially connected and features plenty of local scenery and locations. In each ninety-minute long episode, a police team investigates a different crime that has taken place. Can you solve the crime before the detectives do?

German television broadcaster Das Erste streams each episode online with subtitles in German. There are, however, no English subtitles so some German language knowledge is necessary for this one. But it’s a great way to practice!

Starring veteran actress Corinna Harfouch, Holiday Secrets is a three-part miniseries. The drama tells the story of a family that reunites for the holidays, bringing three generations back together. But, as the title promises, there are some secrets that threaten to unravel and reveal themselves.