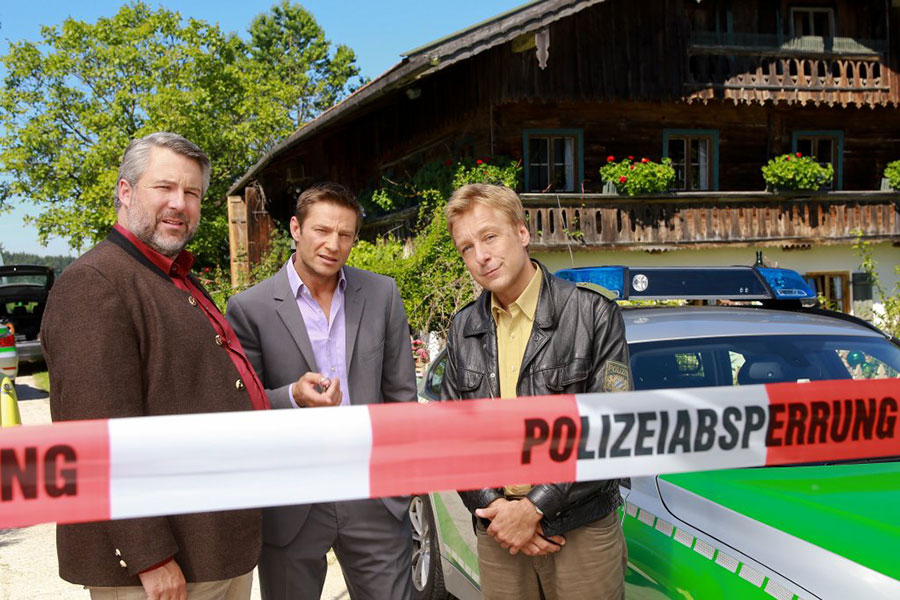 Before the days of streaming all day every day, television offered a special connection with its audience. Whereas films are an occasional commitment of a couple of hours, television shows are a weekly part of life. The characters and settings become personal. And with tv shows set in Munich and across Bavaria, you truly get to experience the region in a new way.

You can be entertained with a humorous take on everyday life or become immersed in a local crime series. There are options for whatever strikes your fancy.

If you speak German, the options are seemingly endless. But thanks to today’s connected world, many streaming services offer English language subtitles for shows.

Sit back and get ready to binge Bavarian style with these 16 TV shows set in Munich and across Bavaria! (If films are more your style, try 13 Great Movies Filmed in Munich & Bavaria.)

This first group features TV shows set in Munich. Regardless of whether each show is a comedy or a drama, the city provides a backdrop for the action. Many times this means “big city” problems or concerns.

The show stars Helmut Fischer in the title role of Franze, a detective forced into retirement but not ready to give up the game just yet. He has a lot of plates in the air; if he isn’t pursuing criminals, he’s chasing the ladies, or appeasing his long-suffering culture-loving wife.

As it is one of the tv shows set in Munich, it isn’t surprising to see so many of the city’s most popular locations as settings. There is a passion for Munich. It is full of humor but there is some good drama, too. Even decades later, the series is still quite beloved. In fact, there’s a statue of Fischer as Franze in Münchner Freiheit.

Buy Monaco Franze on Amazon or watch at Bayerischer Rundfunk.

Often compared to Sex and the City, Servus Baby is to Munich what the American show is to New York City. The series follows four 30-something female friends through the trials and tribulations of love, relationships, and emotions that are life.

The award-winning show aired its second season in the fall of 2020.

There is no shortage of police and crime TV shows set in Munich. Before ending in 2020 after more than 40 years on air, SOKO München was part of the popular SOKO series of crime shows set across the German-speaking world.

Each episode of the show follows a special investigation team in Munich as they pursue a range of crimes and criminals.

Lindenstraße was a weekly German soap that ran from 1985 until 2020 that was based on the English soap of Coronation Street.

Over nearly 2000 episodes, viewers got to know a group of families who are all neighbors on a fictional street in Munich. The show has garnered attention for continually tackling difficult current events and societal topics from homosexuality to racism.

Buy Lindenstraße on Amazon or watch at Das Erste.

Tatort is a German television institution. Each week, viewers tune in to see a crime show set in a different German city. The Tatort: Munich subset of shows features the crime-fighting team of Batic and Leitmayr, a Croatian detective and a Munich detective. The pair have been fighting crime since the early 1990s.

The show has a long and storied history. For example, for more than a decade, Helmut Fischer aka Monaco Franze served as a detective on the Munich Tatort episodes. Part of what keeps viewers tuning in is seeing their city as the setting for the riveting crime.

Buy Tatort: Munich on Amazon or watch at Das Erste.

For many, the first thing that comes to mind when you say “Munich” is “beer.” And the city’s Oktoberfest is the world’s largest folk festival. Netflix capitalizes on that connection with their 2020 show Oktoberfest: Beer & Blood.

Set around the turn of the century, the show follows a dramatic rivalry between the city’s beer breweries that is as much about business as it is about family.

Martina Gedeck is among the show’s cast.

Since 2012, actress Katharina Böhm has been fighting crime in Munich as Die Chefin. She stars as Vera Lanz, the police chief inspector. After her husband, also a police inspector, dies, Lanz is left to raise their daughter while managing her career.

Buy Die Chefin on Amazon or watch on ZDF.

While many crime shows tend to be overly dramatic with dark lighting and eerie music, München 7 is not one of those shows.

The crime comedy show ran from 2004 until 2016 and includes comedy actress Monika Gruber among the cast. The city’s longtime former mayor, Christian Ude, even appeared on the show!

On the show, the crime-fighting duo Bartl and Kandler are based in the downtown area. You can see them at spots like Marienplatz and Viktualienmarkt.

Buy München 7 on Amazon or watch on Das Erste.

Get ready to experience small-town life with these tv shows set in Bavaria. While they aren’t always completely authentic, there is definitely a different pace of life when compared to the tv shows set in Munich.

If you enjoy episodic soap operas and are looking for one with a Bavarian twist, Dahoam is Dahoam is likely for you. And when I say Bavarian, I mean Bavarian. The show uses Bavarian dialect plus you can expect to see plenty of Trachten.

The show is set in Lansing, a made-up Upper Bavarian village. The drama centers around several business-owning families, including one with a brewery and another with a restaurant.

Buy Dahoam is Dahoam on Amazon or watch on BR.

Not far from Munich, the town of Rosenheim plays host to the comedy crime show Die Rosenheim Cops. The premise is that a born and bred Bavarian investigator solves crimes with his team in this idyllic small-town setting.

The show is filmed in and around the town and is so popular that Rosenheim offers tours of filming locations.

Rosenheim Cops on Amazon or watch at ZDF.

Set deep in the Bavarian town of Bad Tölz, Der Bulle von Tölz is another popular comedy meets crime show. And on this show, the emphasis is more on “comedy” than on “crime.”

Der Bulle, that is “the cop,” is Hauptkommissar Benno Berghammer, a single middle-aged man living with and being cared for by his widowed mother.

You might be doing a double-take, but it’s true! Monty Python made tv shows set in Munich and Bavaria. In 1972, two comedy specials from the English comedy troupe Monty Python were aired on West German television. Filmed primarily in Bavaria in both English and in German, the two specials are something else.

These aren’t merely translations of old sketches. There are new sketches as well as cultural tweaks (such as the use of famous Germans like Albrecht Dürer and Franz Beckenbauer) and adaptations to old favorites. Eagle-eyed viewers will also recognize Schloss Nymphenburg as well as Neuschwanstein, the latter being rather prominently featured.

Wolfratshausen has its own comedy cop show, but its title can vary. Originally, it was titled Heiter bis tödlich: Hubert und Staller but then that was shortened to Hubert und Staller. But since 2019, it is now Hubert ohne Staller after one half of the title (Staller) exited the show.

On the show, Polizeiobermeister Franz Hubert and his team pursue crimes around their Bavarian town. But they aren’t always the most serious of teams.

Hubert und Staller on Amazon or watch on Das Erste.

Of the tv shows set in Bavaria, this one is probably the most unique. Most of the shows I have highlighted in this article are comedy or crime shows. But Kunst und Krempel is very different.

On the show, Bavarians bring in items to be appraised and reviewed by experts. Think Antiques Roadshow where each episode is filmed in a different Bavarian city’s palace, museum, or monastery.

Buy Kunst + Krempel book on Amazon or watch on BR.

Set in a luxury hotel near Rosenheim, Sturm der Liebe is a popular German soap opera that is aired across Europe. The focus of the show is the owners and employees of the five-star Hotel Fürstenhof.

The show is largely filmed at Bavaria Filmstadt (which offers tours!). But, since this is one of the tv shows set in Bavaria it does, on occasion, shoot outdoors in locations across Bavaria.

Sturm der Liebe on Amazon or watch on Das Erste.

Like the Munich branch of the Tatort franchise, Tatort Franken offers a crime-fighting police show set in Nuremberg. Since 2015, detective chief inspectors Paul Ringelhahn (portrayed by Dagmar Manzel) and Felix Voss (portrayed by Fabian Hinrichs) and their police team have been keeping the Franconian region of Germany safe.