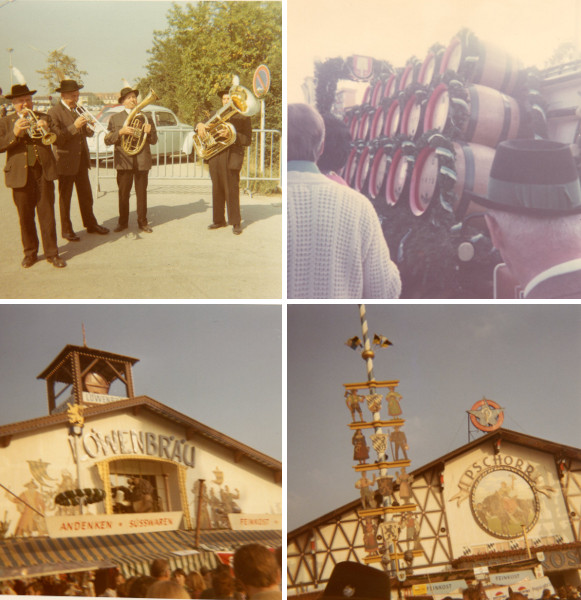 Maybe it’s the computer nerd in me, but I hate crowds. I actively avoid them. When everyone else is going on vacation in the peak of summer during July and August, I’m quietly planning a trip for the fall or maybe in early spring. But, I have to admit, I wouldn’t mind — just once — visiting the world famous Oktoberfest. It’s just one of those must-do, must-see things that you can’t miss. You have to go at least once! And with more than 6 million people visiting Oktoberfest in Munich, Germany during the sixteen days when the festival takes place, well, maybe I’ll just have to figure out the least busy day to visit. Unfortunately it won’t be this year as Oktoberfest 2013 kicks off this weekend!

My mom was generous enough to share her Oktoberfest photos from the early 1970s for this post.

Oktoberfest has been held nearly every year since its unofficial founding in 1810 when, then-Crown Prince Ludwig was married to Princess Therese of Saxe-Hildburghausen on October 17th. The original festivals included horse racing in the large meadow named after Ludwig’s new wife. There have been a few years that Oktoberfest didn’t take place but the tradition has continued.

For someone who doesn’t like beer and has no interest in drinking it (or anything else alcoholic for that matter.), visiting Oktoberfest might seem surprising or even silly. But Oktoberfest is more than just a beer-drinking festival, as some tourists seem to think. I’d love to see the opening parade and the tapping of the first keg by the mayor of Munich. (I hear Christian Ude’s had enough practice since he’s been mayor to get it in a single tap — which is also a sign of good luck according to local tradition.) Plus there are rides, lots of food and plenty of souvenirs. Who doesn’t love those wonderful heart-shaped Lebkuchen?

If I hadn’t fallen in love with Munich when we visited, I probably wouldn’t even consider making an trip to Oktoberfest. But there’s just something about it that’s got me itching to participate. As far as I’m concerned, my husband can sample the Munich beers while I eat my way across the Theresienwiese, the field where the festival is held. The only downfall? Hotel prices can go sky-high during the festival period.

If you’re really feeling the spirit and decide to go in Trachtenware (lederhosen or a dirndl), take note when tying the apron on your dirndl or before making eyes at a lady in a dirndl: “According to old tradition, wearing the bow on the left indicates that a girl is single and ready to mingle. A bow on the right means the lass is taken, so blokes beware if you aren’t looking for trouble!”

If you can’t make Oktoberfest or you want to make the festival season last longer, consider the Tegernsee Forest Festival, Straubinger Gäuboden Folk Festival, and Rosenheim Autumn Festival (link only available in German) which all usually take place in the months and weeks leading up to Oktoberfest. And, of course, during the winter there’s Starkbierfest.

All opinions are my own. Photos are by my mother from the early 1970s.