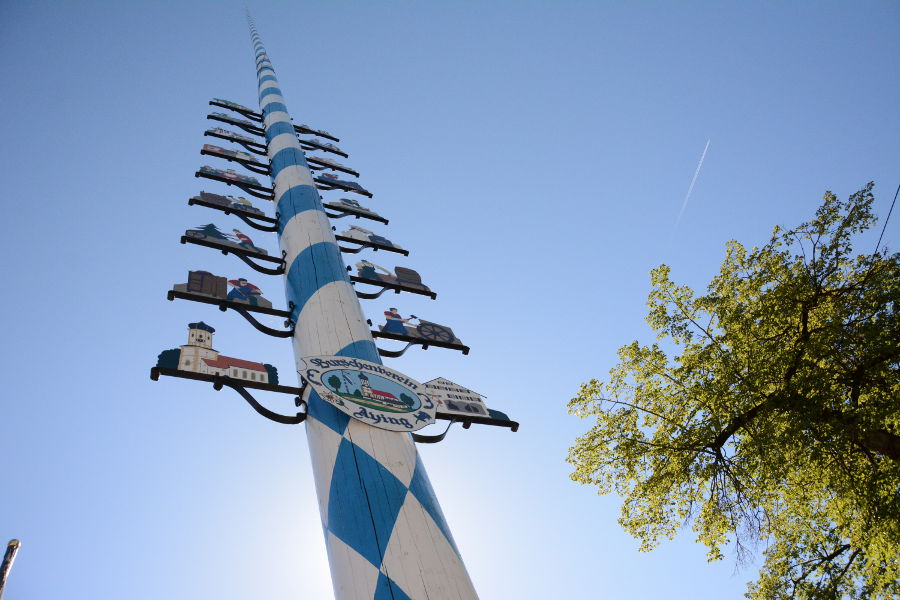 While no one could accuse Munich of being too urban, it just takes a short trip to the suburbs to really get a taste of Bavaria. The small, sleepy village of Aying comes alive quite quickly. That’s thanks in large part to Ayinger Beer, the town’s brewery, and the beer brand’s restaurant and Biergarten. The charming town is well worth a visit — whether it’s merely a trip out from Munich for a meal and a drink or for an overnight adventure. I’ve put together my guide to Aying, Germany to share my favorites.

Where to Stay in Aying

The Brauereigasthof Hotel Aying is a special experience to treat yourself to (and a special someone in your life). Located in the heart of Aying, the hotel offers rooms with all the charms you’d expect — solid wood furniture and architectural details, double-windows that open wide to let all that fresh air in. And the rooms are updated to include all the modern luxuries you want.

In addition to being extremely comfortable, a stay at the hotel includes impressive amenities. There are free in-room bottles of Ayinger beer and sparkling water from the brewery’s own well. And all stays include the daily breakfast buffet. The buffet is more than generous in its offerings, in terms of quantity, quality, and variety. It’s hard to turn down some of the housemade plum and pear jams.

The staff at the Brauereigasthof Hotel Aying are incredibly friendly, courteous and professional. They’re hard to miss in their traditional Trachten uniforms and never pass by without the local greeting of “grüß Gott.”

Book a room at Brauereigasthof-Hotel Aying

Where to Eat in Aying

While the hotel does have a fine dining restaurant, August & Maria, it’s all about the Biergarten. Just across the street from the hotel is the Ayinger Bräustüberl. In warm weather the fun is all outside. But the restaurant’s wood paneled interior isn’t to be missed either. The staff are friendly and helpful.

The food, traditional and hearty Bavarian fare, is delicious. The giant Schnitzel is no misnomer, it lives up to its promise. And be sure to leave room for dessert. The Apfelkucherl, fried apple slices covered in cinnamon and sugar, with vanilla ice cream is the perfect finish to any meal.

If you’re looking for something a little lighter or more casual, the self-service section of the Biergarten is where you want to be. Just stop by the stand on the side of the restaurant for food and drink.

The Biergarten and restaurant are popular and they can both get busy quick! The place is a popular watering hole for cyclists. The activity and excitement add to the fun atmosphere.

What to Do in Aying

Aying is a quiet, restful town. But there are a few options for daytime activities.

While there aren’t really any sidewalks in Aying and the roads are rather narrow, walking and cycling isn’t uncommon. It’s easily walkable and it’s a relaxing locale to wander around in. The small mostly residential community is full of beautifully maintained homes and the local church, St. Andreas, adds a special charm — especially when the bell tolls.

A number of the buildings in the center of the village feature paintings on the exterior walls. Some of the paintings are decorative while others share local history. Nearly every building seems to have beautiful flowers and you can find many small details. I found a woman’s head on the metal clips holding the window shutters open on the hotel.

It’s easy to get lost but just find that onion-shaped church tower and you’ll be back in the center of town in no time.

Ayinger Beer is, arguably, the town’s claim to fame. And the brewery is just a short walk from the train station or the center of town, where the blue and white striped Maypole stands in front of the hotel.

As you arrive at the brewery, just listen for the clinking of glass. From the street, you can watch as glass bottles go by on a conveyor belt. The current brewery, located along a field, was built in 1999. It’s a very handsome, modern-looking building.

And just in front is the brewery’s well. Unlike other breweries, Aying has its own well. In fact, they’re the only brewery in Munich to have their own water source. The 176 m deep well draws on its source, the St. Andreas.

German-speaking fans of the brew can tour the facilities, take part in beer seminars or tastings. The rest of us can visit the gift shop. There you can purchase branded items (think beer mugs and glasses) or the beer itself.

(The one exception for the tours is during Oktoberfest. During that period the brewery does do tours in English and Italian.)

What might look like a bowling alley to us modern folk is actually a skittle alley, or Kegelbahn in German. The town is home to an 1886 skittle alley! The alley isn’t open all the time but is available for rental.

Museum Sixthof preserves a 200 year old Upper Bavarian “single roofed farmyard.” The museum is open on Sundays and bank holidays during the spring and summer months for a few hours in the afternoon. The house has ties to the brewery’s founder, Johann Liebhard, who is also the great-grandfather of the brewery’s current owner, Franz Inselkammer.

Aying is located in a very scenic area. Maybe you’re interested in seeing the local countryside or a more challenging hike to the mountains. Regardless of your interests or your skill level, there are plenty of options available for those that want to enjoy the outdoors.

Every five years, a local group in Aying builds and replaces the handsome blue and white Maypole in front of the hotel. The first of May is a national holiday and Germany and experiencing the raising of a Maypole is a wonderful Bavarian tradition.

Aying is very easy to reach by public transit from Munich. The S7 line from the Innenstadt, or city center, will get you right to the Aying train station in roughly 40 minutes. From there it’s a short walk to the center of the village. Unfortunately, there aren’t many sidewalks or signs to offer directions. But the walk is relatively straight with only a few street changes.

If you’re arriving by car, there are some parking spots in and around the hotel and Bräustüberl. Because parking can be limited, drivers also park on the edges of the streets.

This post contains affiliate links. All opinions, as well as all photos, are my own.