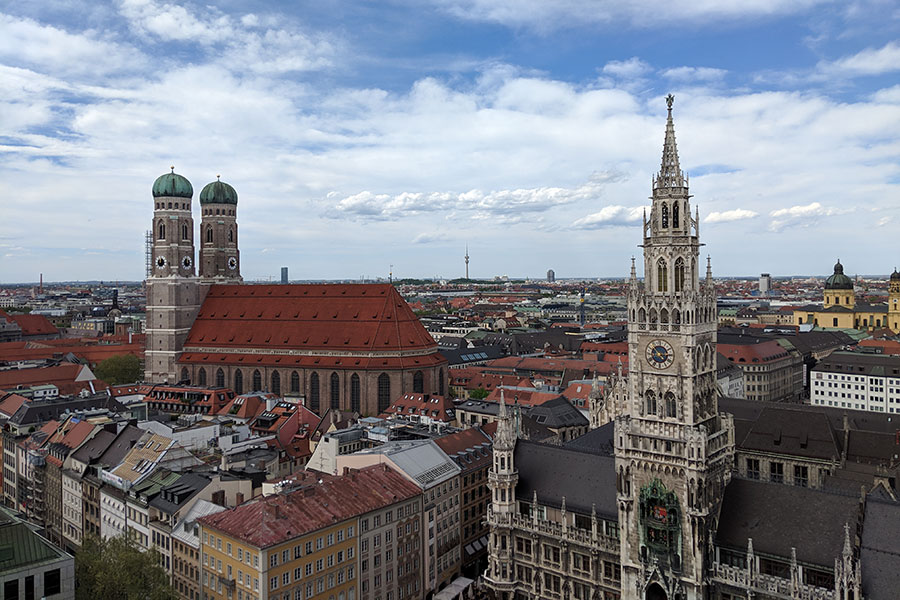 For the best view in Munich, you need to visit St. Peter’s Church, or Alter Peter, in the heart of the city’s old city. Part of Munich’s magic and charm is its low skyline. In most of the city, especially the Altstadt, no building is permitted to be taller than the Frauenkirche, the city’s iconic double-domed church. But with no dedicated observation tower centrally located, how to get a peek at this beautiful city from above and enjoy the Alps in the background? Around Marienplatz there are a few options, including an observation deck within city hall (Neues Rathaus). But Alter Peter’s tower offers stunning unobstructed views.

A Brief History of Alter Peter

For anyone not already familiar with Munich’s churches or the most popular Munich sightseeing spots, St. Peter’s Church is the oldest church in the city. Known affectionately by locals as Alter Peter (“old Peter”), the church stands on Petersbergl, a small hill in the center of the Altstadt.

Since the 11th century, there has been a church on the hill. However, over the centuries, the church has undergone renovations and been rebuilt.

Some of the church’s most prominent external decorations are its clocks. Somewhat oddly, some sides of the facade even feature more than a single clock face. When quizzed as to why the church has eight clocks on it, Munich cabaretist and comedian Karl Valentine had a simple answer: so that eight people can check the time at once!

Inside of the church, its main altar features a sculpture of its patron saint that is the work of Munich builder and sculptor Erasmus Grasser. There are additional altars by Ignaz Günther as well as a ceiling fresco by Johann Baptist Zimmermann, whose work you can also see at Kloster Andechs and the nearby Nymphenburg Palace and Residenz.

But for one of the best views over Munich, inside the chapel of Alter Peter is not where you want to be.

To climb the steps to the top of St. Peter’s tower it’s outside, not inside, the church that you need to be. Head to the corner of Rindermarkt and Petersplatz. There you’ll find a small ticket office outside of the door leading into the tower. If there’s already a line of people waiting for their turn, then you’re in the right place!

At approximately 300 steps, the climb to the top of Alter Peter doesn’t sound difficult. But it isn’t easy. The steps seem never-ending and the landings are narrow. Add in the fact that people will be coming down the same steps while you’re trying to go up, and it’s rather snug. There are few good spots to take a break along the way. And if it isn’t obvious by this point, there is no elevator.

When you reach the top, however, you’re richly rewarded. The four sides of the tower’s observation deck offer uninterrupted views over the city of Munich and reaching, on a clear day, to the Alps. Alter Peter offers the best view in Munich.

Keep in mind the observation deck, if you can call it that, is also narrow. It can be difficult to navigate when there are crowds fighting to go in both directions around the tower.

Alter Peter sits just off of Marienplatz. As such it’s extremely easy to reach on foot or with public transit. The S-Bahn lines S1, S2, S3, S4, S6, S7, and S8 as well as the U-Bahn lines U3 and U6 all stop at Marienplatz Bahnhof, or train station. These are the most direct ways to access the city square but trams and buses also serve the surrounding area.

Street parking is available but it can be difficult to find an empty spot. Additionally, because Marienplatz is part of a pedestrian-only zone, you may not be able to park very close.